“Phakamile was a very good child and he hated everything that was wrong. He was a person who was involved with the scouts and church activities and he was involved in everything. He was involved in everything, in all the church activities, at school, sports and he was a person who wanted the best and who was goal orientated and he committed himself in achieving his goals. He was a person who was a visionary who channelled all his energies to accomplish the best of things. He wanted success – he wanted the good things to succeed. He would say “I want a plan to succeed and when it succeeds it should benefit all”. He always wanted his dreams to come true and be successful. Everything about him was so amazing because he was such a great person.”  Sylvia Mabija (sister of Phakamile).

This is the story of Phakamile Mabija, as taken from an Article published by Diakonia in 1977.

On Thursday July, 7th, Mr Phakamile Mabija, a detainee under the Riotous Assemblies Act, plunged to his death after allegedly jumping through a louvred window on the sixth floor of the Transvaal Road Police Station in Kimberley. 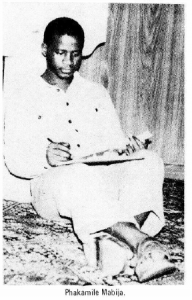 Phakamile had been detained on 27th June, after an alleged stone-throwing incident in Vergenoeg Township. At the time, he was a full-time youth worker for the Anglican Diocese of Kimberley.  As a member of the Anglican Church’s NOMAD team (a team of young people doing diocesan youth work), Phakamile had been a delegate on the National Youth Leadership Training Programme, a 3 and a half month training course held at the beginning of this year in the Durban area.  Those of us associated with NYLTP got to know Phakamile as a forceful yet gentle and non-violent man.

It was thus with great pain, shock and disbelief that we learned of Phakamile’s death on Friday, July 8.  At a memorial service held that same day, a group of friends identified themselves with the appended statement.  We would be grateful if you could give this statement and the background thereto maximum publicity in your newspaper.  If Christians and the public in general may, through this, become more fully aware of the evil of detention and if this awareness will lead to some meaningful action against this evil, then perhaps Phakamile’s death has not been totally pointless.”

Youth workers in the Province (ACSA) then set aside the 1st Sunday in September as Youth Sunday in commemoration of Phakamile and other Anglican young people who were killed by the apartheid government.

Story submitted by Revd. Donny Meyer – Diocesan Youth Chaplain of Cape Town who was also a participant, with Phakamile, on the NOMADS Programme.

PROVINCIAL YOUTH SUNDAY is on the 1st SEPTEMBER 2013.

During your Youth Services on this day, please give thanks to God for all young Anglicans who stood up for what they believed in and who were prepared to make the sacrifices necessary to make a difference for themselves and their people.  Also, pray that all young people will be goal focused and that their goals will honour God in its achievement.

Outcomes Based Spiritual Development? (Project2013) →
← Announcing the WINNER of the Youth Month Competition